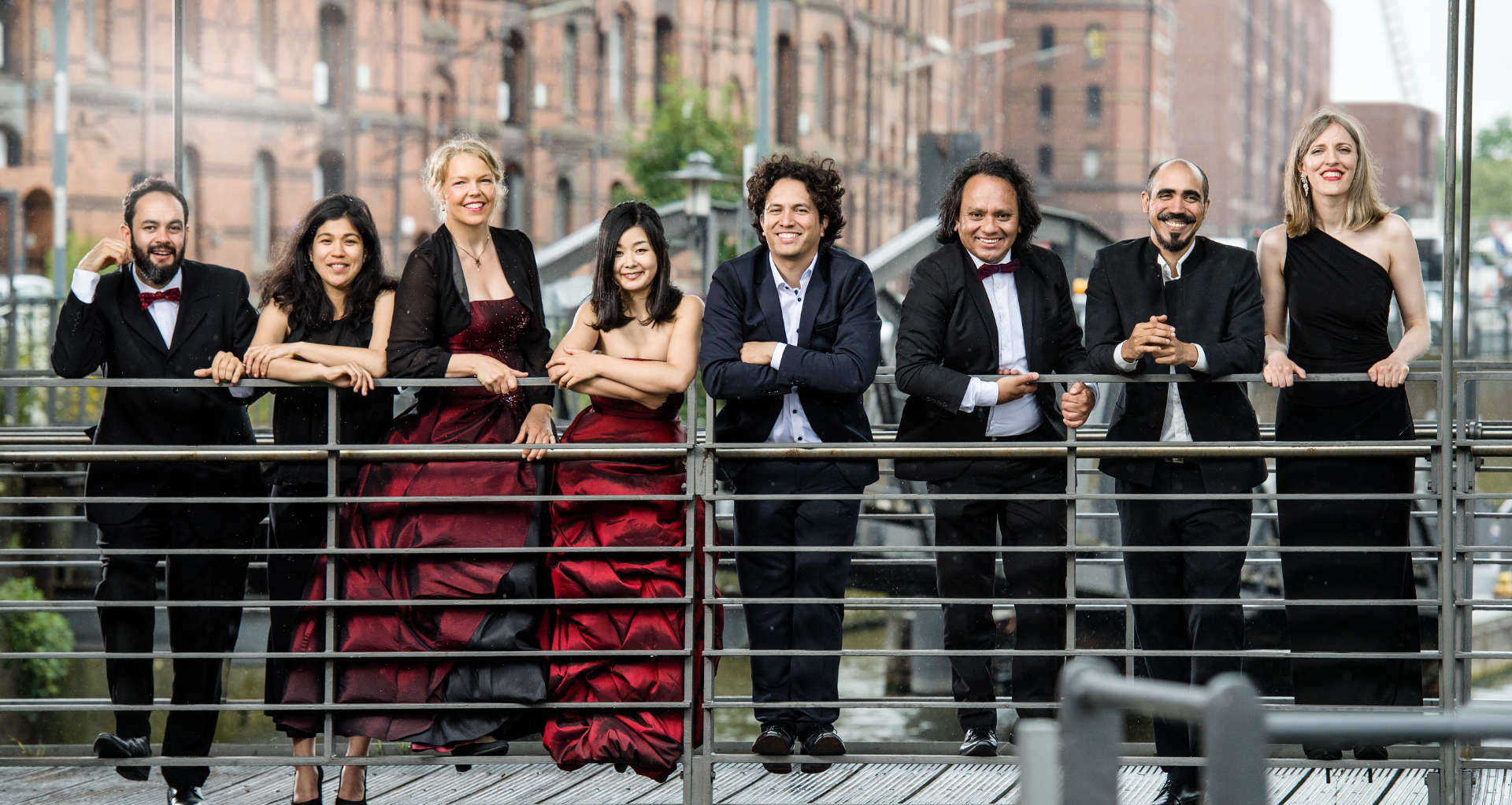 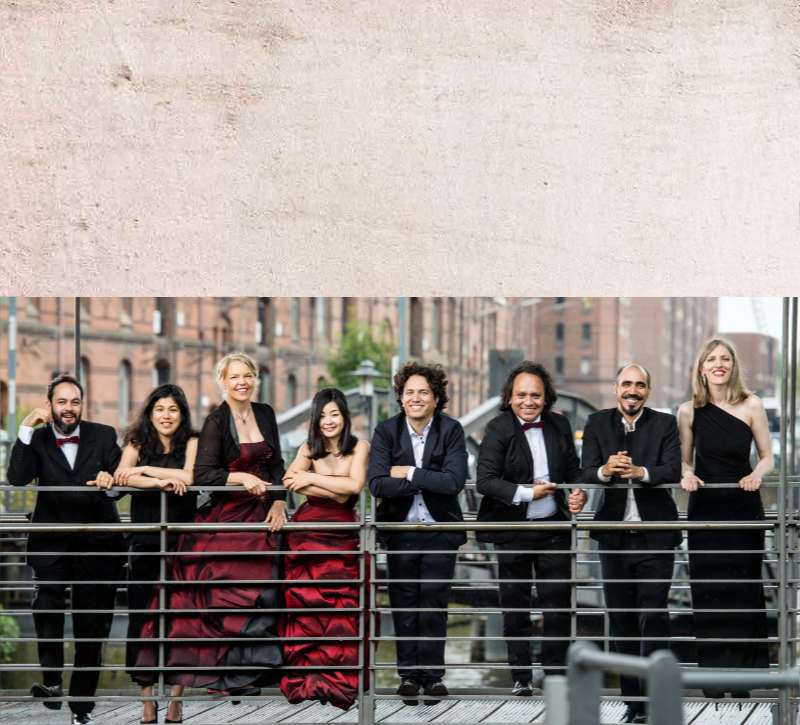 Los Temperamentos, founded in 2009, embraces the music of the 17th and 18th centuries. Under the direction of Colombian cellist and arranger Néstor Fabián Cortés Garzón, the ensemble specializes in rediscovering and resonating the relationships between the seemingly opposing worlds of baroque music in Latin America and Europe. In their thematically diverse programs, the artists blend different styles, composers and cultures, thus repeatedly demonstrating the liveliness and immense richness of colors of what is now simply called “early music”.

Néstor Fabián Cortés Garzón learned to play various percussion and guitar instruments at a young age with percussionist Carlos Arturo Rendón and at the Conservatorio de la Universidad Tecnológica de Pereira in Colombia. He studied modern cello at the Conservatorio de la Universidad Nacional de Colombia in Bogotá, where he graduated with honors in 2008. Initially, baroque cello was his secondary instrument, but his love for early music grew steadily, especially through numerous projects at the Schola Cantorum Basiliensis in Bogotá and master classes; for example, with the Academy for Early Music Berlin.

Cortés Garzón then completed a postgraduate and master’s degree in the class of the internationally known baroque cellist Viola de Hoog at the Hochschule für Künste Bremen. In addition to his elaborate concert schedule, the Colombian musician has been intensively researching baroque music from South and Central Americas and thus successfully reconstructing and arranging works from various codices, as well as musical traditions. The cellist, who now lives in Bremen, also specializes in the ornamentation practice of the 17th and 18th centuries. Concert tours with various orchestras and ensembles have taken the young cellist all over Europe and Latin America. Néstor Cortes is also the founder and artistic director of the Bremen Baroque Orchestra, which was established in 2014. The orchestra is particularly known for its original and diverse program selections, and regularly collaborates with well-known musicians, such as Dorothee Oberlinger, Ryo Terakado, Dmitry Sinkovsky or Midori Seiler.

As a soloist, in addition to an ensemble and choir singer, she has given concerts in countries such as Belgium, Denmark, France, Israel, Italy, Japan, Austria, Poland, Russia, Switzerland, Slovenia and the USA, among others. She has sung with the Sonderjyllands Sinfonieorchester, the Philharmonie Novosibirsk, Elbipolis, La Stravaganza Cologne, Concerto Farinelli, Ensemble Weser-Renaissance, the Bremer Barock Consort and the WorldYouthChoir. Baroque opera productions include performances at the festival Impulso in Mexico, the Dahlheimer Sommer festival and in Cavalli’s La Didone at Theater Bremen.

Swantje Tams Freier received scholarships from the Tesdorpf’schen gemeinnützigen Stiftung, the Oscar und Vera Ritter-Stiftung, the Rotary Club HamburgSteintor and the Eduard-Witt-Stiftung. In 2015 she was honored with the title of “Ideenmacherin” from the Ideenlosten in Bremen for her innovative management of Los Temperamentos.

She continued her studies in early music with Prof. Pieter van Dijk at the Conservatorium van Amsterdam and in numerous master classes with specialists, such as Wolfgang Zerer, Edoardo Belotti, Menno van Delft, Skip Sempé and Frédéric Haas.

The young musician regularly performs as a soloist, as well as with various orchestras and ensembles nationwide. She has had the privilege of playing with renowned ensembles, such as the Ensemble Weser-Renaissance and Elyma, and is a permanent member of the Bremen Baroque Orchestra. She has also participated in several CD and radio recordings for Radio Bremen.

In addition to her performances, Remmert has coached multiple international productions, master courses and auditions – including summer courses of the Mozarteum Salzburg and the Balthasar Neumann Choir. Since 2014, Nadine Remmert has been a lecturer for harpsichord, continuo and chamber music at the Hochschule für Musik und Theater Hamburg.

In 2004 he won the Rosa Mistica, a guitar competition in Curitiva, Brazil, before he began focusing on historical lute instruments and performing early music practice.

He attended numerous master classes and was invited by the Freiburg Baroque Orchestra to enhance his studies in Europe in 2008. He then studied lute instruments and baroque guitar with Lee Santana and Joachim Held at the Hochschule für Künste Bremen.

He has performed under well-known conductors, such as Gabriel Garrido, throughout many countries in Europe, Central and South America with various ensembles and orchestras, including the Deutsche Kammerphilharmonie Bremen, Knabenchor Hannover, Bremer Barockorchester and Orkiestra Historyczna.

He regularly gives master classes in Mexico. In 2020 he presented his first edition reconstruction of a Mexican manuscript of Follia by Arcangelo Corelli for guitar with Tree Edition.

Felipe Maximiliano Egaña Labrín was born in Santiago de Chile. He studied art, music and flute at the Universidad de Chile and transverse flute with Wilbert Hazelzet at the Koninklijk Conservatorium in The Hague. The Chilean flautist continued his training with a master’s degree and concert exam with Marten Root at the Hochschule für Künste in Bremen.

Felipe Egaña has given concerts with multiple early music ensembles and orchestras, such as the Bach Choir and Orchestra of the Netherlands, Le concert d’Apollon, La dolcezza, The Netherlands Bach Society, and the Bremen Barockorchester. In addition to performing with Los Temperamentos, he is also an active member of various chamber music ensembles, such as Les points cardinaux and Cancrizans duo.

He performed chamber music and orchestral concerts in Chile and Mexico with the baroque orchestra Nuevo Mundo. Engagements, such as the Académie Baroque Européenne d’Ambronay under the direction of Sigiswald Kuijken, have taken the traverse flutist to many European countries.

Felipe Egaña has been heard at international festivals and concert series throughout Germany, Belgium, the Netherlands, France, Italy, Mexico and Chile, among others.

Tomoe Badiarova studied modern violin with Takayoshi Wanami at the Toho University of Music in Tokyo and baroque violin with Ryo Terakado at the Koninklijk Conservatorium in The Hague. In 2007 she made her debut as a violin soloist with the Hibiki Chamber Orchestra under Masahiro Arita. Soon followed by performances with the Bach Collegium Japan, the Tokyo Bach Mozart Orchestra and the ensembles Les Boreades, La Petite Bande, Il Gardelino, Harmonie Universelle and Les Esprits Animaux. She has given concerts with The Hague Piano Quintet in the Minatomirai Hall in Tokyo and the Amsterdam Concertgebouw.

In addition to the violin, Tomoe Badiarova has also mastered the viola and the extraordinary cello da Spalla, with repertoire ranging from early baroque to the romantic era. Performances have taken her to numerous well-known festivals, including the Festival d’Ambronay, MA Festival, Bruges, Ghent Festival, Göttingen Handel Festival, La Folle Journée and the Banchetto Musicale Vilnius Festival. Tomoe Badiarova also collaborated on several productions for leading international radio stations such as the BBC, Musiq‘3, the Concertzender and Radio France.

The violinist and violist Alice Vaz grew up in Lisbon, Portugal. She came to Germany in 2008 to study violin and viola with Prof. Thomas Klug and Prof. Esther Van Stralen at the Hochschule für Künste in Bremen. Additionally, she studied baroque violin with Veronika Skuplik and modern music with Prof. Barbara Maurer at the Folkwang Universität der Künste in Essen. Alice Vaz expanded her knowledge through various master classes with Stéphanie Paulet, Midori Seiler, Jane Rogers and Garth Knox, among others.

She was a member of the orchestra of the Hanseatic City of Lübeck and the orchestra of the Oldenburg State Theater and has given concerts in several European countries. In the field of early music, she plays with well-known ensembles such as L’Arpeggiata, La Dolcezza, Holland Baroque, the Bremer Barockorchester, De Nieuwe Philharmonie Utrecht, Weser Renaissance and Oltremontano. She can be heard on multiple radio and CD recordings, including Radio Bremen and the Arcantus label.

Franciska Anna Hajdu was born in Hungary and already started playing the violin in her early childhood. Since the age of 14 she began participating regularly in masterclasses in Hungary and all over Europe, where she worked with teachers such as Zsolt Kalló, Katalin Kokas and Lucia Krommer.

Percussionist Miguel Ángel Altamar de la Torre was born in Barranquilla, Colombia. He grew up surrounded by tropical music, where elements of African, European and preColumbian cultures merged and significantly influenced the development of his modern performance practice. In Colombia, Miguel Altamar learned to play the double bass and comprehensively studied Columbian folk music, along with the traditional percussion instruments of the Caribbean and Pacific coastal regions of the country, such as the Palenque. Altamar then expanded his musical repertoire in Europe, exploring various genres such as jazz and pop music.

He completed numerous tours with well-known artists in the industry, including Culcha Candela and Jupiter Jones, and also took part in multiple classical productions by the Bremen Barockorchester, the ensemble Cellosound and the Deutsches Theater Göttingen. With various artists he recorded albums for the labels Neuklang, MIR, Arcantus, Melting Pot and Universal Music. The musician, who lives in Cologne, is also in demand as an instrumental teacher. In addition to pop, rock and jazz, he is particularly interested in the quintessential rhythms of Latin American music and its traditional instruments, such as the cajón.